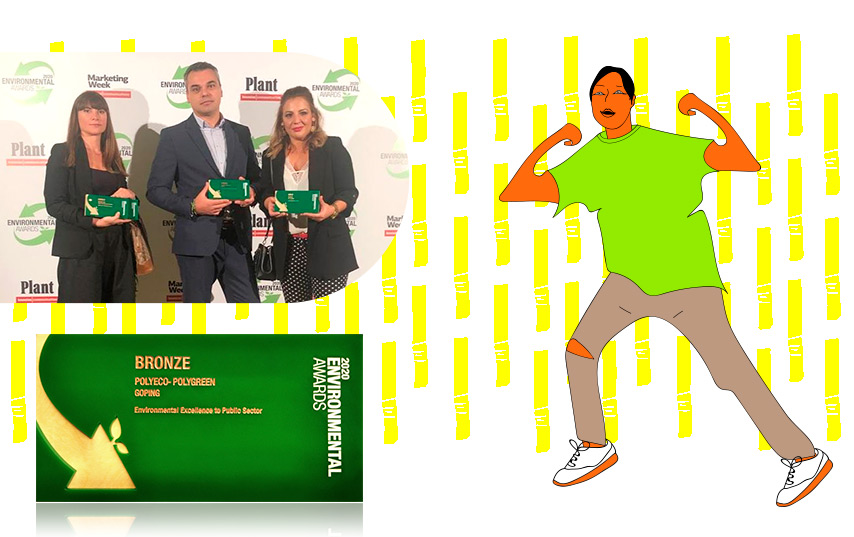 Already a Bronze medalist in its first race to save Attica’s beaches! GOPING, an exemplary and dynamic platform for the collection and recycling of cigarette butts, won the Bronze Award for “Environmental Excellence to Public Sector” at this year’s Environmental Awards.

In its Pilot period this year, GOPING proved that one butt at a time Athenians are ready to start making a difference to our planet. GOPING’s philosophy is based on novel, responsible and sustainable initiatives to prevent and reverse pollution while raising public awareness and responsibility.

By setting up special ashtrays and designated collection bins, in collaboration with organized beach businesses along Attica’s coast, the new initiative is clearly a success. Apart from the collection of cigarette butts, GOPING also transports them to licensed waste management facilities, thus also boosting the cyclical economy. The Bronze Award was accompanied by a fantastic achievement reached in the summer of 2020: in only 30 days GOPING collected 500.000 butts from 65 beaches! Our digital campaign received 1.2 million video views and our website, created by Globe One Digital, received 200.000 visits.

GOPING’s award came primarily for so directly addressing shocking ecological facts that can no longer be ignored and taking action, with the motto ‘Let’s Go GOPING!’ Facts such as that annually in Greece alone, smokers buy 1.1 million packs and on a global scale, 4,5 trillion butts end up polluting the environment, will keep the GOPING team bounding over ecological hurdles and generating change.